Slow Parade is Atlanta based psych-folk collective headed up by tune smith Matthew Pendrick. After nearly a decade spent soaking up the city's rich blues and roots music scene , Slow Parade was formed out of the need for a new extension. Calling upon bassist Andrea Demarcus (Cicada Rhythm) and multi instrumentalist Paul Stevens ( Grand Vapids, Chamber Cartel ), Pendrick found a voice for this new Parade in the pair's deftly trained ears and nimble touch. Having played with Demarcus in her roots rock ensemble, Cicada Rhythm (New West) , they found in Stevens a skilled partner with an ear for the surreal. Slow Parade melts the song-forward writing sensibilities of a century of American roots music to a sonic pallet which splatters reverb drenched feedback over cowboy chords like a cool blade through hot mud. Having shared the stage with a diverse set of music makers like Mail the Horse , Parker Gispert (the Whigs), and Michelle Malone , the Parade is eager to keep rolling. A brief stint of dates on the West Coast this summer inspired their latest single Bangs, an end of summer gasoline fueled surf mambo that wouldn't sound out of place blaring from the torn speakers of Roy Orbisons '65 Caddy. Bangs and it's B Side, Jackpot! sees the trio pushing their hazy dazy folks rock out of the nest with the help of producer Damon Moon (Mail the Horse, Sydney Eloise & the Palms) and pedal steel player Matt "Pistol" Stoessel (Cracker, T Hardy Morris). If the summer must end, Slow Parade is here to suggest you use the last fumes in the tank to park it at the trailhead.

New tools, new itches to scratch. The goals of this particular Parade were explicitly implied through means of analog conversion : Slow Parade follows sonic bliss, translating the oft mud caked melodies back to silver vibrations of which they were born. Slow Parade, to catch the tail of the echo loop that does knows no decay. Slow Parade, dreaming backwards in cut time to a pool party in the clouds. The group’s debut album "Big Plans" (the Cottage Recording Co.) was a song cycle of loss and rebirth, an exploration of creativity in a soundbite culture. At turns , it is a stark vision of new century america from the view of a young man still unsure of how wide open his eyes. "Big Plans" simmered quietly with gut string guitar plucks, gently whispered pleas for salvation, and a lush backdrop of ear candy to make Phil Spector swoon. Occasionally, it even rocked. With their newest work "Bangs," Slow Parade has stepped out of the ally and is rattling the glass all the way down main street. Like a lost love ballad of Dick Dale, "Bangs" throws a lurid sneer across the teeny boppers at the Hop. "Let's GO!" they shout. "Who's left behind?" the Parade barks back with a lip-curled smirk. Demarcus’ slinky Latin bass line clutches tight to a rumba surf shuffle while sticky sweet guitar lines weave like tipsy teenagers through Pendrick's plaintive howls. The B side "Jackpot!" slows the roll to a country-fried waltz time while pushing the sonic envelope over the canyon's cliff. "Like a drunk singing Psalms, I've been looking for signs," Pendrick sings with a shaky swagger, "in the entrails of the hearts i thought I'd left behind." A pedal steel guitar weeps in the corner as cassette deck feedback loops swirl upwards, then crash down like flaming paper planes. You can be sure Hank ain't done it this way…

Born and raised in Atlanta, Georgia, Parade leader Matthew Pendrick came up during a creative heyday in one of the south's small town artistic meccas. In the early days, Pendrick honed his musical chops while busking under the tutelage of infamous street shouter Guitar Red. The youngster soaked up the city's deep musical history, digging down through the roots and sharing the stage with many of the south's musical torch bearers from Eddie Tigner (the Ink Spots) to Oliver Wood (the Wood Brothers) . Active for nearly a decade Atlanta's thriving music scene, Matthew has played side-man to many of the cities finest young talent including Cicada Rhythm, Sara Rachele, Sydney Eloise, and Kristen Englenz. Expanding his musical pallet into fresh territory, Pendrick formed the psychedelic folk trio Slow Parade with fellow Atlanta natives Andrea Demarcus and Paul Stevens to execute a vision that had been slowly simmering in the dustier corners of his brain. Inspired by 60's psych classics and Atlanta's thriving indie rock scene, Slow Parade honed in on a unique sound that stays fresh long after the strings have rusted.

With a pocket full of new songs and a itch for the road, Slow Parade is creeping like the kudzu that covers their native south. With the release of "Bangs," the group is laying the way for their next LP and a fuller touring schedule. "Get the fuck out of town more, that's the goal," jokes Pendrick, who just returned from a month long cycling tour of the west coast with a busted achilles that has laid him up but hasn't done much to halt the parade. "The sound has gotten bigger for sure, but what i love about Slow Parade is that everyone knows how to play the space, or really, to not play," Pendrick muses. While many bands fill out the stage with umpteen members, auxiliary percussion sets and stacks of casios at waiting, Slow Parade seems comfortable letting the echos have their room to breathe. "I like songs, for sure. But Slow Parade is the place where we can get our ya ya's out, indulge in those disgusting sounds that really titillate my ear holes." 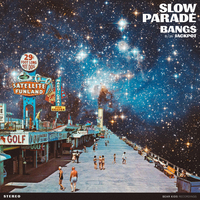