We Swim is the sophomore record by Atlanta indie-pop outfit, Dot.s. It was conceived and recorded inside of a closet, whose walls and ceiling were upholstered with thick quilts that would block sound and air conditioning and all comfort that sound and air-conditioning provide. All the songs were written and recorded by Ryan A. James and played by Bonnie Hardie, Joe Crabb, Nick Lynds and Garrett Goss.

With the exception of an intermission, We Swim acts as one winding piece, circulating around a theme of entertainment and the inherent sadness doomed to follow a life that has been desensitized to devices meant to stimulate our attention. There’s some corny love stuff in there, too. Through a structure that is both winding and highly percussive, Dot.s hopes to take music shelved as “pop” or “dance” to a place that feels unfamiliar, strange and sweet. 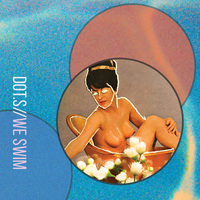