Anyone who has seen one of 100 Watt Horse’s many shows over the past year or so knows that George Pettis and Anna Jeter can silence a room with no microphone and just an acoustic guitar. It is with this familiar intimacy that the debut full-length album from 100 Watt Horse opens with “Bees 1” – an appropriately lo-fi acoustic strum and an enveloping tape hiss, showcasing a sparse arrangement that in no way lessens the power of the song as an opening statement. And while 100 Watt Horse consistently returns to this spare and honest approach throughout the album, they also occasionally approach pop and folk songs through more a experimental lens, incorporating analog synths and drum machines and studio wizardry into their arresting compositions. The result is a cohesive but eclectic achievement. 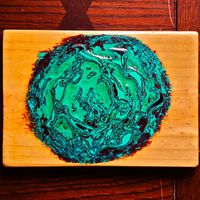